Living in the northern Sweden, Boden to be exact, in a red house with white knots and a big backyard. In the family you find the owner of the kennel Marianne, her husband Peter and their two daughters Victoria and Sofia. All of us have always been engaged in our dogs, some more than others. Marianne got her first TT 1980 called Cissi and after a couple of years with groenandael Nita it was time to get a TT again. It was then Dorje’s Yin-Kaa-Kha came in to our life 1991 and it was Ninja, as we called her, that became our foundation bitch for the kennel. Victoria, born 1994 and growing up with all of our TTs, are most involved in the kennel. It began with Acca (PFH Baccara) which was the first TT she tried to train some ”real” obedience with and also the first dog that she entered a dogshow with. Amir (PFH Amiral) and Cissi (PFH Elegance) also got some training on the backyard with obedience, agility and other fun stuff. When our G-litter was born in 2007 and we decided to keep one puppy, that became two, Thea (PFH Gorgeous) and Hera (PFH Goddess) the obedience training increased. 2016 we debuted in rally obedience and we have also tried a couple of real obedience competitions.

We have a small breeding with a carefully planned litter about every two years. We want to use mentally stable och healthy dogs that match the breed standard as we desire with typical TT expression, correct square body and good angulation.

The first weeks the puppies are living in a specially made box in one of our bedrooms. From 4 weeks of age they are moving out to our livingroom to get used to the many standard sounds. We also start to teach them some routines, for example that we are going out in the morning, after they have eaten and so on. Before 8 weeks of age they have also traveled by car, tried to have necklace and walked on a leash. 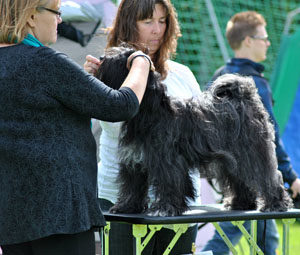 If you are planning to buy a puppy from us

We are following TTS and the Swedish Kennel Club’s recommendations
and are only using healthy dogs in breeding, both psychical and physical.

The dog is at least 8 weeks old

You are given a registrationpapier on the dog

The dog is inspected by a vet maximum 7 days before you pick your dog up, parvovaccinated around the age of 8 weeks and dewormed.

The dog is also insured against so-called latent defects for 2 years.

A puppiepackage from Eukanuba are you also given, which includes some puppy food and other ”good to have” things.

You are given 1 years of membership in TTS (Tibetan Terriers specialclub in Sweden) and SvKTR (Swedish special club for Tibetan breeds).

Some information and instruction about food, care and coatcare.

And of course some small things that the dog need to have from ”home” – blanket, some toys and so on.